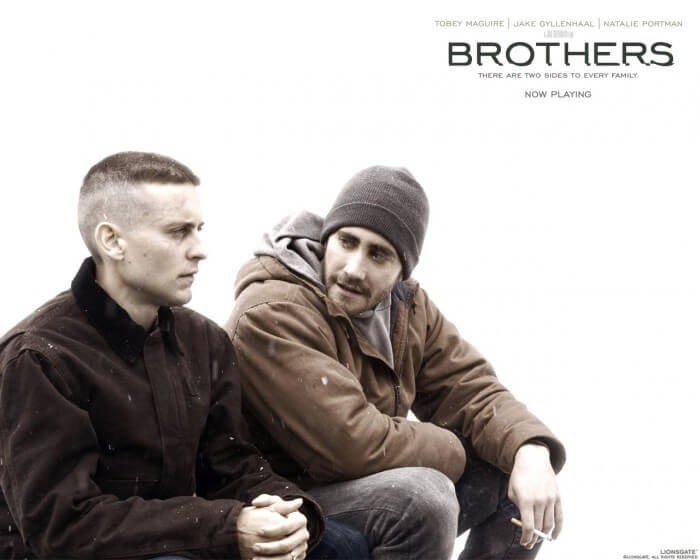 I know, I know. This is not a new movie, so I couldn’t recommend seeing it in the theater even if I wanted to. In fact, this film came out in 2009, and frankly, I didn’t particularly care to see it then. I thought Tobey Maguire was endearing enough in the Spider-Man movies, but I couldn’t imagine him believably pulling off a tough Marine. And all I really knew of Natalie Portman as of that time were her roles from the Star Wars movies, which, to be honest, ends up being the brunt of a lot of Star Wars jokes. So, needless to say, Brothers didn’t catch my attention enough to lure me to the theater in 2009.

Boy am I glad Netflix recommended it to me recently, though! It’s pretty intense, but a really good movie, in my opinion. In fact, Tobey Maguire ended up getting a Golden Globe nomination for best actor for this role. Had he won, I think it definitely would have been well-deserved. Here’s the gist:

Sam Cahill (Tobey Maguire) is a Marine who is married to Grace (Natalie Portman). Sam’s brother, Tommy (Jake Gyllenhaal) is kind of a screw-up who has a rough past. Sam gets sent on a mission in Afghanistan, where his helicopter gets shot down, leaving everyone – including his wife and family – to believe he is dead. In actuality, he is taken as a prisoner of war, along with one of his men.

As you can imagine (I won’t tell you the details), Sam has to face some very intense situations as a POW. If you are in the military, the family member of a man or woman in the military or police or fire, you know these people can go through some situations that leave deep scars emotionally, and can even mess with their sanity. Thankfully, the movie doesn’t spend a whole lot of time on this part of the story, but Sam is definitely affected.

Of course, Sam’s family has to deal with the grief, thinking he is gone forever. There is a funeral, a lot of grieving, and trying to move on. When Sam turns up alive and comes home, of course it’s a dream come true for the family, but Sam has changed during his time away, and he is suspicious that Grace and Tommy have formed a romance in his absence. In my opinion, this is right around where Tobey Maguire’s performance is award worthy. But I won’t tell you the rest. As intense as the ending is, I think it is really excellent.

Just to warn you, this film is rated R, so if you steer clear of R rated movies, don’t see it. The rating came probably from the sheer amount of “F” words used in it, as well as some obviously intense themes. There’s no sex or nudity in this one, though. Brutality in the POW situations is all implied, but never shown graphically.

Having family members and friends who have courageously served in WWII, Korea, Vietnam, Kuwait, Iraq, and Afghanistan, I know a little bit about the affects of war on a human being. I’ve seen it change people (understandably so), and while I’ve never seen it as dramatically impacting as is portrayed in this film, I would imagine Brothers might hit close to home for some of you. I would advise caution for those of you who think that might be the case. Otherwise, I definitely recommend seeing this film at least once.

One Response to Brothers