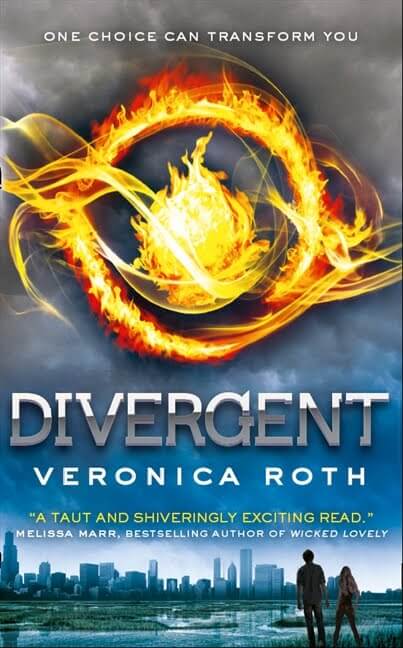 People often ask me for book recommendations. I usually ask them what they like to read, and most of the time they say, “I really liked the Hunger Games.”

Well, then you will probably like Divergent by Veronica Roth.

Divergent was one of those books I couldn’t put down. Veronica Roth creates an exciting dystopian world that you just want to know more about.

The protagonist in the story is Beatrice, a sixteen-year-old girl growing up in dystopian Chicago. She is a member of a faction called Abnegation, about which she explains from the very beginning that she doesn’t feel like she belongs. She feels isolated and alone and unworthy. Lucky for her, there are four other factions and “Choosing Day” is coming up.

Beatrice decides to leave her current faction and move to another one, which is a big deal because factions operate almost like religions. They prize one thing above everything else. Abnegation: selflessness, Erudite: knowledge, Candor: honesty, Amity: harmony, Dauntless: bravery. Leaving your faction would be the equivalent of saying, “Hey Mom, I don’t want to be a Christian anymore.” Once you are in your faction, there is no changing, and you better hope you pass initiation or you will end up factionless – a purposeless people who do all of the menial jobs in the city and are always hungry and never have enough.

Thinking it will be so much different than Abnegation, Beatrice leaves her family’s faction and joins Dauntless. But what I love most about the book is that she learns that bravery and selflessness are often the same thing.

Even though there are some things I would have done differently, Veronica Roth has an excellent story. She shows the bravery of Abnegations (who are clearly Christians), and proves that just because you prefer someone else doesn’t mean you are weak, it actually shows your strength.

Roth also makes fear in the book real. From terrible things happening to her characters to the fears that are purposely placed on the Dauntless, it becomes something you, as the reader, feel, and realize it is truly life and death.

If you have read this book and have a different opinion, or just something else to add, I would LOVE to hear it! Please show me your inner Candor.

This entry was posted in Books!. Bookmark the permalink.

One Response to Divergent