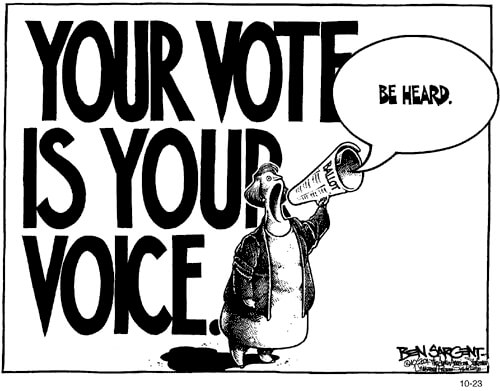 “One person can make a difference, and everyone should try.” – John F. Kennedy

This week I’m sending in my absentee voter ballot. Not because I’m going to be absent on Election Day, but because my husband and I have found over the years it’s far more convenient to do vote-by-mail and eliminate all the excuses to not actually cast our votes on the big day. I’m all for convenience.

I have to admit, election season excites me, and it’s not because of the brutal sparring matches we get to witness on our candidates’ campaign trails. It’s because free and fair elections are one of the primary pillars of what defines a true democracy, and I have the privilege of participating in that when I cast my vote. For me, every time the nation votes, it’s an historical moment.

But every election season I hear the same things from various friends and acquaintances: “Why even bother? Our votes don’t count anyway.” Or “I’m not political, so I don’t vote.”

I like to refer to these things as “myths”, because they are common misperceptions, but they simply are not true. Maybe some clarification on how things work will help.

First, let’s get the “non-political” point out of the way. I understand people don’t like to include themselves in the messiness of politics. Often people like to “stay out of it” because their social circle can’t manage to respectfully debate and/or disagree politically and still stay friends. This is truly a shame, but a different topic for a different day.

The thing is, it’s impossible to be “non-political”. Politics is you. It is me. Its sole and entire purpose is for and about the citizens. It determines every single law that affects your life, from the paved streets you drive on, to the schools you or your kids attend, to the taxes on your entertainment center, to your ability to get inexpensive prescription drugs, to your freedom to choose what religion you ascribe to. Every freedom we so often take for granted is there because it’s protected by a law, and can just as easily be taken away. Every job you get, or DON’T get, is there because our system allows for it, or doesn’t allow for it. There are so many minute details I could go into, but to say you have nothing to do with politics is simply untrue, and essentially, an oxymoron. You have EVERYTHING to do with politics, even if you don’t know it or don’t want it.

Next, why bother voting if our votes don’t even count?

Just a brief overview of how our electoral system works: We have this thing called the Electoral College to elect the nation’s top two political spots: president and vice president. This is also another topic for another day, but the college is basically people who are representatives of the larger body to cast votes for us based on how the larger body votes. It’s a winner-take-all system in MOST states. In my state of California, the majority of voters historically vote democrat, so our state’s Electoral College delegates vote democrat.

But what if we had all of these republicans who just didn’t vote, and if they did, CA might not be entirely blue (democrat)? (Obviously unlikely, but just an idea.) OR, what happens when the Electoral College votes one way, but the overall popular vote goes another way? The Electoral College still votes in the president and VP, but when the overall popular vote goes the opposite way, it sends a clear message to the new president: the majority of America is looking for something very different than what he/she has to offer. This person would be wise to take very serious note of that.

So what happens if half of the nation doesn’t vote? Or even a quarter? What kind of accurate gauge does that give our leaders of what we want? It doesn’t. At all. In order for our modern-day nation to run as closely as possible to how it was originally designed, we must cast our votes, plain and simple.

Now, for all other elections, including Congress, state leaders, state ballot measures, the Electoral College is no longer in the picture, and your individual vote counts. Things like: funding for colleges, definition of marriage, the death penalty, etc., can be found on your ballot and you get to give your personal stamp of approval or disapproval. Seeing as how all of these issues will have an impact on you, your family, and your family’s future, I would say it’s pretty personal, and therefore important to participate in.

Let me put it this way: if there is anything on this earth that is important to you or you have a conviction about or belief in, the government has the ability to regulate it. And you have the ability to stand for or against that.

So, what’s the moral of the story? VOTE. Do it. Well, inform yourself first. Then vote.

Election Day this year is Tuesday, November 6th , so you still have time to do your research and make informed decisions.

Here are some links that might be helpful in your process:

Please leave your comments and let me know why YOU think voting is important!

Lyndsay Wilkin, an editor for On the Willows, lives in Northern California with her husband, Wyley, and their two kiddos, Harrison and Clara, and their adorable lemon beagle, Indiana (Indie). She received her BA in International Government and hopes to further her education somewhere down the line. In the meantime, she holds the office of "Mommy" and works part-time for Visiting Angels Home Care Services, helping families find caregivers for their loved ones as an alternative to placing them in nursing homes. For fun, she does a little acting on the side and enjoys writing fiction and reading LOTS of books. She loves movies, history, politics, traveling, and volleyball. As a blogger, she's all about big picture topics, especially when it comes to having a biblical worldview in today's Western culture. As a friend, Lynds is absolutely loyal and thoughtful and she would do anything for her friends. “So whether you eat or drink, or whatever you do, do it all for the glory of God.” 1 Corinthians 10:3
View all posts by Lyndsay Wilkin →
This entry was posted in Current Events, Politics. Bookmark the permalink.