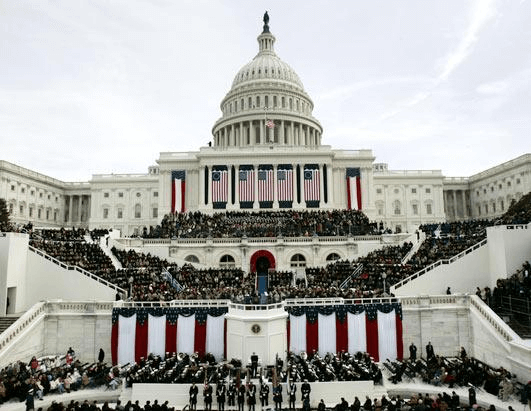 Today, while most of us hurry to fulfill our daily to-do lists of making it on time to class, clocking in at work, buying groceries or dropping kids off at school, a million people will gather in Washington D.C because today is the inauguration — or re-inauguration — of President Barack Obama. It’s not quite the grand affair that it was four years ago when 1.8 million people turned out for the annual and yet historic event of the swearing in of our first black president. Less than half of that are expected to stand witness this year. But still, one million bodies are more than your average Christmas-time mall crowd.

If you’ve seen any recent pictures of our president, you’ll notice he is a victim of the bane of all of his predecessors. Four years of school shootings, embassy attacks, war, debates, press conferences and media nagging have etched themselves into the skin around Obama’s eyes. His face bears testimony to the fears and challenges the past four years have lain upon the American public – both that which we are conscious and unconscious of.

The marks of time Obama physically exhibits is something that many of us might not carry on the outside, but we are well acquainted with them in both mind and heart. For some, the inauguration this year is a time of hope and anticipation. But most of us, whether or not we agree with the president’s policies, have become jaded and skeptical — and even fearful.

There is fear as to whether Obama’s appeals to Congress on gun laws will or will not pass, fear as the numbers of the jobless are posted week after week and we wonder if we too will be one of those statistics, fear about the future of social security, raising our children in an increasingly morally depraved society. There is fear about America’s decline in prowess on the global stage, or on the other hand, fear about American “imperialism.”

There seems to be a lot of fear floating around. No, I wouldn’t say it’s floating; more like it subtly finds its way into our hearts and minds and takes up violent residence once root is established. Hope and change seem far flung and intangible. But fear – that is quite near at hand.

But we are Christians, we say, and we have sound minds and peace and rest, not fear. Do we really, when it comes to matters of our national and common future?

I would wager not. Fear is all too common and descriptive of the Christian mindset when it comes to politics and the global community. But why do we fear? As Christians, do we not know how the story of humanity unfolds and ends? Is it not true that a day will come in which we will live in paradise and guns and global economies and power won’t matter anymore? The story of the world is not a surprise to us. We might not know what the next ten or twenty or even hundred years ahead will look like, but we know the ultimate end. And that should lend us a great measure of confidence.

I am reminded of the story of Jesus calming the sea. Fast asleep on a pillow, as Mark describes it, the waves and the winds arose causing the disciples to fear for their lives and wake Jesus. He arises, rebuking the storm which instantly submits to His command. “How is it that you are so fearful,” Jesus says. “How is it that you have no faith?”

How similar we are to the disciples in the boat! We worry and are afraid of that which rightly seems out of order and chaotic. But we forget that we have a God who will calm the turbulent waters of our world in time — in His time. He might seem like He is withdrawn, leaving us to our fate, but He is there, waiting for His moment to restore all things to Himself and calling His followers to take up faith in the meantime.

Don’t get me wrong. Fear should not be equated with passivity. To stand in the face of that which goes against our conscience and understanding of the will of God and idly let it all unfold before our eyes is cowardly and irresponsible. But complaining or taking action should not be done out of a spirit of fear. Rather, our confidence in our God and the things that He has set indelibly in motion should cause us to face the wrongs and frustrations of the world with a peace and confidence that transcends the fires of fear that burn in our hearts.

Being confident in the character of God who is faithful and mighty to save will get us through the inevitable hard times that lie ahead. The pages of our story as part of humanity have already been written and we can valiantly live in the midst of whatever may come. We can boldly proclaim an eternal salvation that is far greater than the laws and reforms we attempt to enact on the earth.

Today, as President Obama is re-sworn in to another four years of leadership, I hope that Christians, regardless of their political positions, can be confident. But this confidence ought not be solely derived from what the state of affairs will look like four years from now, but in knowing that we have the answer, the long sought after key to knowledge and wisdom. Our God is bigger than the temporal that happens here. Kingdoms and laws on earth will pass away, but His kingdom will always remain.