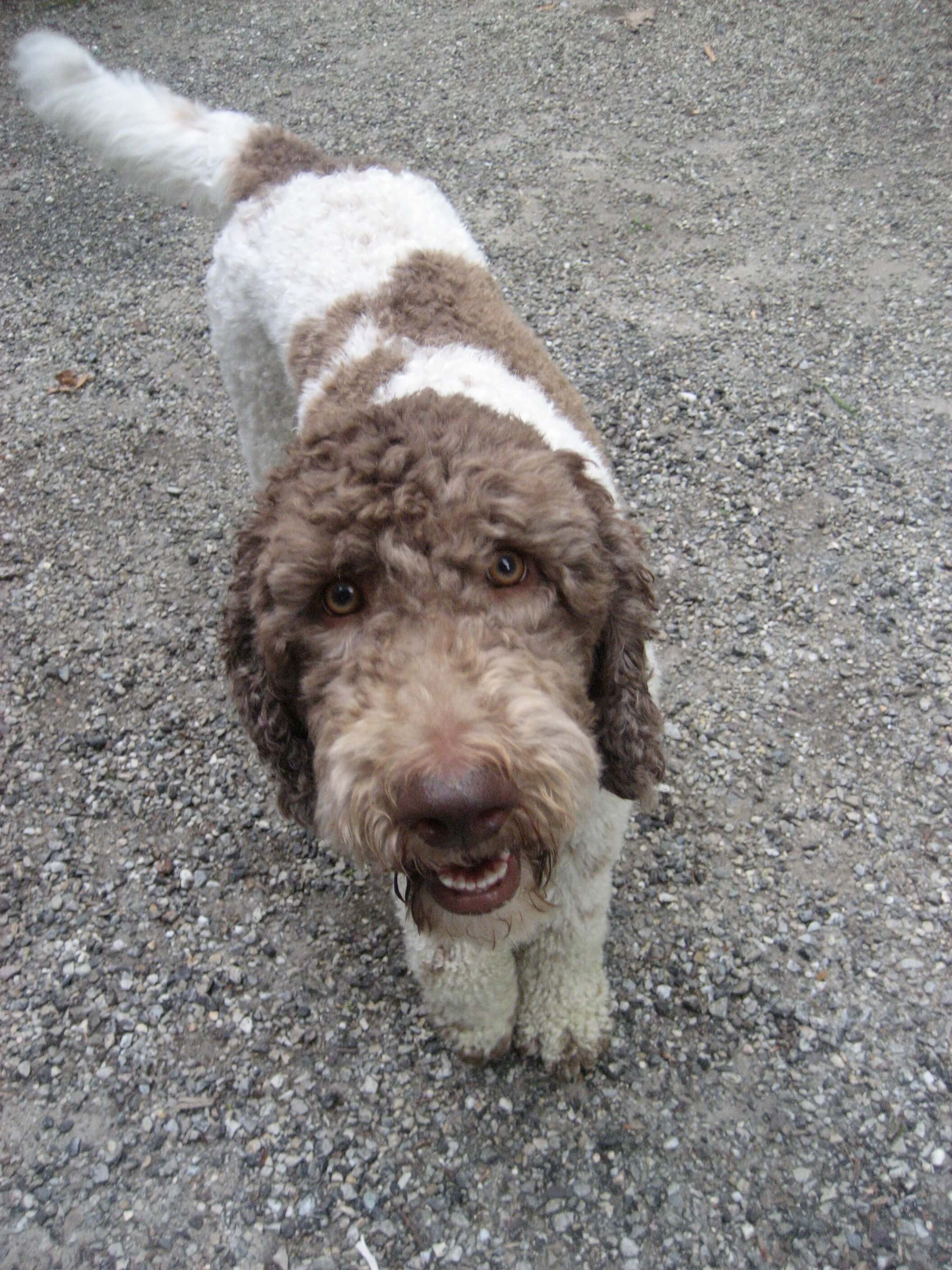 Our dog suffers from anxiety issues and low self-esteem.

Before owning a dog, it never occurred to me that dogs could suffer from anxiety and low self-esteem. There are a LOT of things that never occur to non-dog-owners. Then you get a dog and the next thing you know you’re consulting a dog whisperer and shelling out sixteen dollars at the natural food co-op for “Rescue Remedy,” a plant-based stress-reliever with which to lace the doggie bowl water.

The dog in question is Gracie, a year-old labradoodle. Gracie came to us last October when she was  four months old. She was a remarkably good puppy: housebroken, not prone to chewing, and patient with our young daughters. She quickly made friends with our neighbors’ golden retriever, and — since both yards were already enclosed by an electric dog fence — as soon as Gracie understood the limits of the fence, we set her free. For most of the winter she was a “free-range dog”; we’d snap on her electric collar in the morning and let her out to play. She’d remain outside until bedtime, with occasional visits inside for food and naps.

We thought that by giving her so much freedom, we’d given her the ideal dog’s life. No being cooped up inside, no crating, no loneliness. Gracie and the puppy next door roamed their two acres at will, romping together until sundown.

Then the barking started.

Around spring, we noticed that Gracie barked — loudly and obsessively — at anybody who wasn’t immediate family. This included our mail woman, the UPS man, visiting friends, and passing neighbors. At first the barking was limited to when Gracie was outside, but before long she’d follow visitors inside and — no pun intended — hound them. Next, she started leaping up from inside the house to bark and growl out the window at perceived threats.

Nothing helped, and the situation was becoming intolerable, especially since we were expecting our fourth child in a matter of months. When our daughters’ four year old friend came to play, Gracie followed the poor girl throughout the house and yard, barking aggressively. She accosted delivery people in our yard and our neighbors’ yard. One day I heard her outside, barking like her life depended on it. She sounded so terrified that I went out to investigate. Instead of a rabid bear or threatening intruder, she’d cornered . . . a brown paper bag that had blown out of the trash.

Our neighbors suggested that we contact a professional, and recommended someone who’d trained their dog. “He’s the dog whisperer,” they kept saying. We were skeptical, but desperate. And that’s how we met Zev.

Zev turned out to truly be a dog whisperer, and a people whisperer as well. A diminutive man with a fringe of shoulder-length ringlets, he looked like a member of a seventies-era folk band. His voice, calm and soothing, never rose above a croon — not even when Gracie spent thirty minutes barking at him during our first session, not even when he conducted a session with our ENTIRE family (three children under five years, plus my husband) right before dinnertime.

I assumed that Zev would work directly with Gracie, or give me some magic commands and hand gestures to stop her barking. I assumed wrong.

The first thing Zev said to do was to shut Gracie in the house whenever we weren’t around. He also suggested bringing her crate back up from the basement (where we’d banished it because it seemed so cruel to put our dog in a cage), and leaving her leash on whenever possible, so that we could easily grab her.

In other words, Zev suggested that we limit her freedom.

Next, Zev worked on our family’s relationship with Gracie. He encouraged us to spend more time reviewing the basic commands that she’d already mastered, like “Sit,” “Stay,” and “Come.” He told us to take her for more walks, and to play fetch.

What was the point of all this? Well, we thought we’d been right to give Gracie her freedom — a “long leash,” so to speak. In doing so, it turns out we’d actually given her a responsibility she couldn’t handle. Gracie thought her job was to protect her territory, but when we allowed her to roam without restrictions she got jumpy and anxious — so she barked. As Zev put it, “It’s like giving a five year old a gun and telling them to defend the house while you’re out.”

Gracie needed to feel secure, loved, and confident within the context of a relationship with our family. That was the point of practicing basic training, going for walks, and playing fetch; these things made her feel like she was safe with us, so that when she got anxious and started barking, we could call her to come and be calmed.

Of course, this isn’t just about dogs; it’s about us.

“Freedom” is an ideal that people strive for, especially in this country. But freedom, divorced from any constraints, without the boundaries of relationship, can be too much of a good thing. When we reject community, we tend to get jumpy and anxious, just like Gracie. The very relationships that “limit” our freedom — relationships with friends, family, spouse, children, God — are actually what give us the security and confidence to be more fully ourselves.

And Gracie? She’s doing better, but she’s still a work in progress. Just like all of us.

One Response to Life Lessons from the Dog Whisperer