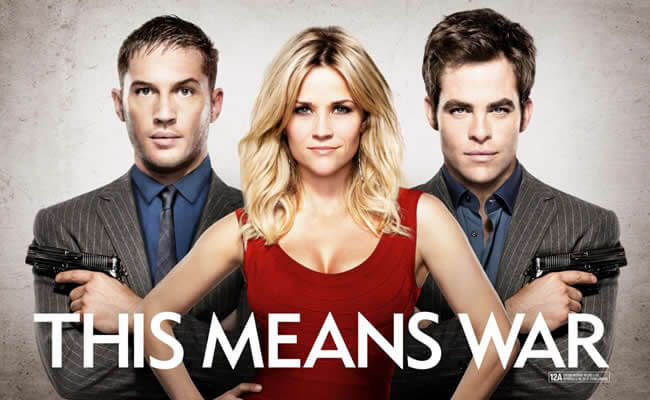 I know in my review of The Vow I said I’m not the kind of girl to see every chick flick that hits the big screen, so I may be accused of misrepresenting myself with this review, but, believe me, I went kind of kicking and screaming. Some of my close girl friends wanted to see This Means War, and they are so much fun to be around that I couldn’t refuse. Maybe it was the fact that they are so much fun that I thought this movie was thoroughly entertaining, but nevertheless, I quite enjoyed it! I don’t usually think romantic comedies require a huge screen and a $10+ ticket to be enjoyed, so go ahead and rent it for a buck and enjoy it from the comfort of your own couch if you’re interested.

Just by watching the previews and trailers, you know that this movie is about two guys (played by Chris Pine and Tom Hardy) who are dating the same girl (played by Reese Witherspoon). Because the plot isn’t particularly complex, I won’t give too much away. But the two guys are best friends who work for the CIA, and they agree to let the girl make the decision about who she ultimately wants to be with. They then proceed to try to sabotage each other’s efforts in wooing her. Some of those parts are pretty darn funny.

Now, I’m not a Chris Pine fan, though most of my girlfriends would call me a crazy person for admitting that. And Reese was my favorite during the Legally Blonde and Sweet Home Alabama days, but her movies and roles have fallen so painfully flat since then that I just haven’t been enticed to see any of her films as of late. However, I thought she did a good job of redeeming herself in this one. She was refreshingly funny. Like genuinely funny. She was a little more risqué this time around than I’ve ever seen her before, which I was a tiny bit disappointed by, but there are no scenes that have to be fully fast-forwarded through, which is a plus. Chelsea Handler plays the inevitable best friend. I happen to think Ms. Handler’s comedy is absolutely foul, and while she did bring a fair amount of crudeness to her parts of this film, she actually did quite a commendable job acting, and I ended up kind of (really) liking her character (not to be confused with her morals).

My major beef with this film is in part of the resolution to the crisis, which I will not divulge. Ok, it’s about who she actually chooses in the end. It made no sense to me. Let’s just say my girlfriends and I had to hash it out afterward to figure out why things happened the way they did, and in the end I was annoyed (with the movie, not my friends). The actual ending of the movie was delightful though, I must say.

What I loved about this film was an aspect that one of my BFF’s pointed out in passing as we were discussing it over a late night dessert following the show. She said, “At least it portrayed men actually pursuing a girl.” As I thought about it, I agreed; it was refreshing. Even though the context was comedic and sometimes just a little wrong, the whole movie is about these two guys pulling out all the stops to pursue this woman. It seems too often these days men either don’t have the guts to properly pursue a woman (this is called cowardice) or they have some twisted notion that a woman and loving relationship will somehow fall into their lap. These guys went all out to try to convince the woman of their dreams that he was the one for her. They had to fight for her. What a desirable, attractive quality in a man. That part alone made up for any other qualms I had about This Means War.

Lyndsay Wilkin, an editor for On the Willows, lives in Northern California with her husband, Wyley, and their two kiddos, Harrison and Clara, and their adorable lemon beagle, Indiana (Indie). She received her BA in International Government and hopes to further her education somewhere down the line. In the meantime, she holds the office of "Mommy" and works part-time for Visiting Angels Home Care Services, helping families find caregivers for their loved ones as an alternative to placing them in nursing homes. For fun, she does a little acting on the side and enjoys writing fiction and reading LOTS of books. She loves movies, history, politics, traveling, and volleyball. As a blogger, she's all about big picture topics, especially when it comes to having a biblical worldview in today's Western culture. As a friend, Lynds is absolutely loyal and thoughtful and she would do anything for her friends. “So whether you eat or drink, or whatever you do, do it all for the glory of God.” 1 Corinthians 10:3
View all posts by Lyndsay Wilkin →
This entry was posted in Culture & Media. Bookmark the permalink.