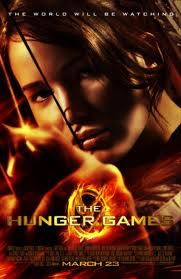 I will begin this review by saying it really is meant for people who have at least read the first book in The Hunger Games trilogy. If you haven’t read it (and you should read it), I would recommend checking out this very excellent review by Allyce Gilligan for Relevant Magazine. Read it here. It gives a more traditional review and comments on some of the moral value of the movie, which I would normally do as well.

That said, I both loved the movie and despised it. I realize I may make some enemies by writing this article, but, as somewhat of a self-proclaimed film critic, I’m allowed to have some critiques, right? I will say that I am not actually one of those people who is disappointed with every movie that is based on a book. For instance, while I do prefer the Harry Potter books over the movies, I am perfectly happy with their screen adaptations, and watch them with utter enjoyment and without disappointment. Did the films leave parts out that I loved from the books? Sure. Did they improve on some parts of the books? You bet. I’ll take ‘em both. So, for however much I despised The Hunger Games movie, you will still notice that I recommended seeing it in the theater – absolutely. That’s because I loved it too.

What did I love about the film? Well, a bunch of things. First of all, we all know that the story itself is brilliant, unique, and very entertaining. I couldn’t help but think as I read the first book that it was pretty much written for the screen, so I expected it to be a great film. Honestly, I had serious doubts about Jennifer Lawrence playing Katniss. I didn’t think she looked the part at all. I pictured Katniss as a strong but scrappy girl, because even though she got to eat squirrel meat every once in a while as a hunter, she was still living in a starving district. Jennifer Lawrence is beautiful and very healthy looking. It just didn’t translate to me. BUT, her performance in this film was what stood out to me the most. It was … fantastic. I thought her acting actually carried the film, and made up for some of the areas that I thought were lacking. I actually liked Katniss’s character more in the movie than I did in the book. So, major kudos to Jennifer and the casting director for getting her on this project.

I also loved Stanley Tucci as Caesar Flickerman. I had high expectations for that charming, capitol host based on the book, and he definitely delivered. Also, even though Lenny Kravitz isn’t exactly an actor, the directing and editing made up for it, and he ended up being every bit the lovable “Cinna” from the book.

My absolute favorite scene in the whole film was actually one that I was really looking forward to, because it moved me so deeply in the book: when Katniss volunteered to take Prim’s place as tribute. The dynamics between Katniss, Prim, and Gale in this scene brought emotion to it that I was really moved by. For that scene alone, I must give Willow Shields props. Her small role as Prim was absolutely powerful.

Ok. “Despise” is a strong word, I know, but when the book is written so strategically to translate to the screen, I think I was justified in having high expectations. When I found myself actually checking the time halfway through the movie, I knew there were some major misses. My main, overall disappointment was what I will describe as anemic dynamics. The book had a lot of intensity in it; whether it was the love story, the inward battle within Katniss about Peeta and Gale, the brutality of the actual games, the outrageous culture of the capitol, and even the unpredictable nature of Haymitch. The movie, from my perspective, took all of those elements and dialed them down so drastically that in the end it seemed almost like a one-note film. I understand making some themes understated to let others rise and shine, but when all of them are understated, nothing really shines. Is that too harsh?

Examples. Where do I begin? I’ll try to pick just a few.

The capitol people definitely dressed weird. Crazy hair, makeup, outfits, the works. I wasn’t “wowed,” but I give it a passing grade. I wish it had gone a few steps further, though. The book refers to the capitol population as having certain ways they talked: accents, high pitches, and talking in sentences that all sounded like they had question marks at the end of them. I was really looking forward to seeing how that would materialize on the screen. But if all of that was embodied in Effie occasionally throwing in a slight British accent to the way she talked, I am pretty unimpressed. Also, movies have this fantastic, magical way of making things appear real when you know there’s no way they could be in reality. That was what I was hoping to see a lot of, particularly when it came to the “progressive” ways of the capitol. I must have missed it if it was really there.

Moving on. The actual Hunger Games. According to the movie, it seems the games only lasted a few days, tops. We who read the books know it was much longer than that. A friend of mine pointed out that there are ways the director can easily show time elapsing without adding hours onto the film. Maybe Gary Ross only wanted the games to last three days? Also, the tracker jackers. I liked how real they looked, but their effects were so understated, it almost seemed like they weren’t that big of a deal. Lots of people are allergic to bee stings, even to the point of death. But these things were genetically engineered by the capitol, and, to me, were one sign of how vicious the capitol was. As I read the book, I remember thinking the scene with these fictional creatures could be really amazing in the movie. Turns out it wasn’t. The book describes their consequences as being significantly more intense than we saw in the film. Next, the dog-like creatures that attacked Katniss, Peeta, and Cato in the end – horrible graphics. Not to mention their entire significance was pretty much completely excluded. They were just thrown in there. Lastly, Rue’s death. I can’t be the only one disappointed by this very emotionally intense part. Maybe the adorable little actress wasn’t up to making a dying scene believable yet, but it just wasn’t. Then of course the sense of urgency wasn’t there, because we didn’t see any of the tributes whisked away by the mysterious hover crafts that retrieved the dead. A cannon never even went off for Rue in the movie. And then it launched into a scene with District 11 in rebellion, rather than sending Katniss the signature bread as a “thank you.” That was a deviation from the book that I think took away from the potency, rather than adding to it.

Almost done. The character development was so lacking. I didn’t even think the book did a particularly good job with this, but it was infinitely better than in the movie. There are some exceptions, I will concede. But overall, they were all so dialed down that I didn’t think the audience could really understand most of the characters. I can’t even get into all the examples, just know I’m shaking my head at the screen writers. Maybe that will change by the time they’re done with the trilogy (assuming they will be doing the triology), but I think the first movie should be able to stand on its own.

My last major gripe. The love story! I think they forgot about it until they were just about done filming, and then someone realized they needed to throw it in there, so they put in a two minute cave scene with just Peeta and Katniss, half of it taken up by Peeta rubbing ointment on Katniss’s wound. That’s it? It was pretty disappointing.

Had I not read the books, it is possible that none of these things would have bothered me at all, and I would have thought it was an amazing movie. My husband read the books and he loved the movie. Most of the things I didn’t like, he didn’t actually have a problem with, so I know not everyone will agree with my critiques.

Anyway, go see it, and let me know what you think! I hope you love it!

9 Responses to The Hunger Games