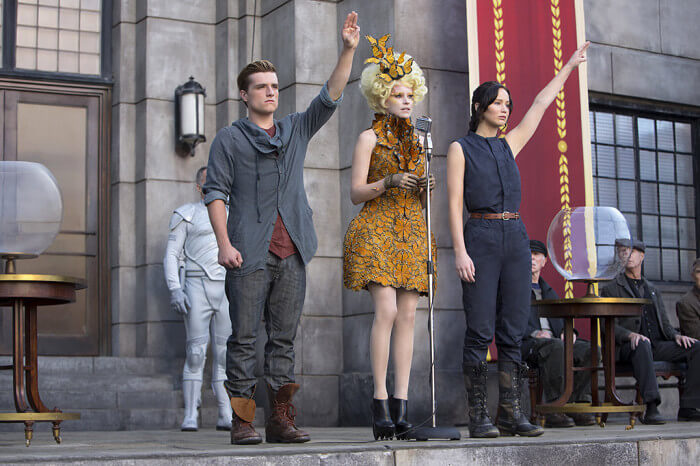 I don’t know if it is possible for me to like this movie more, which, if you recall my review of the first movie, stands in stark contrast. I rarely see movies multiple times in the theater, because, well, it’s expensive and free time is scarce these days. But I saw this one twice, and if I’m being totally transparent, I would probably see it another time.

The second in the Hunger Games trilogy was well written, well directed, had an obviously outstanding budget, brilliant acting with great chemistry, and made some really smart, small diversions from the book that took the story to the next level appropriate for the film adaptation.

For those of you a little fuzzy on the story and why you should see it, it takes place a year after Katniss and Peeta became the victors of their Game, and now it’s the 75th Hunger Games. Of course this means there will be a twist, and, as President Snow is looking for a way to eliminate Katniss, who has become a beacon of hope to a smoldering rebellion movement, he calls back past victors to compete again. As the games move forward, we discover who is on whose side, and this time the enemy isn’t necessarily just within the arena.

Let me start by singing the praises of the actors, beginning with my favorite. Jennifer Lawrence is the new darling of Hollywood currently, and for good reason. Her acting is pretty genius in general, and this movie is another demonstration of that. This girl is seriously committed to her roles, and that’s exactly what is needed for a strong protagonist like this. Her character tells the story in the film. It brings depth and emotion and dynamic differently than in the book, and Jennifer carries the character convincingly. We are able to feel so deeply throughout the story largely because of her. (Pay attention to the very last scene *when* you see it. This is where her brilliance as an actress is so raw and obvious – and she doesn’t even have to say a word.)

The other actors did a fantastic job as well. Josh Hutcherson as Peeta actually won me over this time. In the first movie I thought that casting decision was terrible, but I’ve done a total one-eighty on him. Not to mention his chemistry with Jennifer/Katniss was one hundred percent believable this time. (Thankfully.) Elizabeth Banks as Effie was great the first time and even better this time. She IS Effie. Woody Harrelson took Haymitch to a loveable level. And while I could give a shout out to all the actors because they really were wonderful, I loved having some older talent in there. It brought a maturity to the film that brought the quality way up as well as the intensity.

Moving on, a major thing that stood out to me was that the pacing was so incredibly satisfying. Extra time was spent in all the right spots. Editing (from the book version) was appropriately placed. This way the story unfolds in a way that keeps you totally engaged the entire 146 minutes (that’s almost two and a half hours, for those of you trying to quickly do the math). Just enough action. Just enough character development. Just enough emotion. Just enough plot movement. Just right, in my opinion.

There were, admittedly, a few things I thought were a touch wonky. A few camera angles here and there that seemed like a flash back to the ’70’s/’80’s and made me chuckle. One or two too many dramatic close-ups of Katniss’s horrified face. And then the animated logo closing out the movie before the credits left me scratching my head. I have no idea how that got there. I’d like to think of it as an editing glitch. But these things in no way significantly damage the film!

See it at least once. Or twice. 😉 Let me know what you think!

Lyndsay Wilkin, an editor for On the Willows, lives in Northern California with her husband, Wyley, and their two kiddos, Harrison and Clara, and their adorable lemon beagle, Indiana (Indie). She received her BA in International Government and hopes to further her education somewhere down the line. In the meantime, she holds the office of "Mommy" and works part-time for Visiting Angels Home Care Services, helping families find caregivers for their loved ones as an alternative to placing them in nursing homes. For fun, she does a little acting on the side and enjoys writing fiction and reading LOTS of books. She loves movies, history, politics, traveling, and volleyball. As a blogger, she's all about big picture topics, especially when it comes to having a biblical worldview in today's Western culture. As a friend, Lynds is absolutely loyal and thoughtful and she would do anything for her friends. “So whether you eat or drink, or whatever you do, do it all for the glory of God.” 1 Corinthians 10:3
View all posts by Lyndsay Wilkin →
This entry was posted in Culture & Media, Current Events, Movies. Bookmark the permalink.