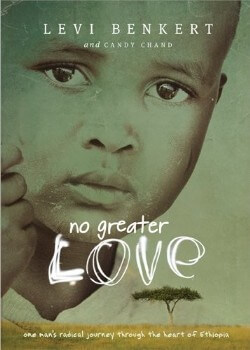 No Greater Love by Levi Benkert and Candy Chand

I loved this book.

Not just because I have met Levi and he is one of the most genuine people I have ever met. Not just because their youngest daughter has an awesome name (but that is true).

But because this story is amazing.

Reading this memoir was like reading Levi’s journal, but with really great writing.

Levi is a man struggling to keep his business, his identity, and the life he has built for his family as the economy takes a downturn. He receives an offer to go help orphans in Ethiopia who are being murdered by the same family that should be protecting them. What follows next changes Levi and his family’s lives.

Instead of saying that they were just answering a call to go to Africa, Levi becomes very transparent and admits that he was essentially walking away from his financial failures (which were not his fault) and looking for a fresh start.

Levi was broken and going through his midlife crisis at twenty-nine years old.

He never says he was selfless or that he is just a big-hearted saint, but a man looking for a way out and God answered. Levi looked into the face of children who had been in the best cases abandoned, and in the worst, almost murdered and decided that he could not walk away. He had to do something. Even though it was VERY hard.

This book showed me that sometimes our victories and God’s victories are not always the same. Levi thought he was “called” to be financially successful and influential in the marketplace, and it turned out that wasn’t what God wanted at the time. God wanted Levi broken, running, and at the end of his rope. That is when He called Levi to the orphans. And even though it took Levi a long time to realize that God wanted him running, Levi ran to Him.

The biggest hero of this book is Levi’s wife, Jessie. Jessie is amazing. She should change her name to Grace. It is clear in Levi’s account that Jessie is his biggest support. She takes the changes in stride, always encouraging her kids, loving others, and above all, supporting her husband at every turn. She is my hero. What a great example of a Proverbs 31 woman. And so practical. It’s not that she doesn’t have an opinion, or that she never has a breakdown. It’s hard and she knows it, but she rises to the occasion the way a partner should.

I longed for Africa, reading this book. I even longed to be “Africa slapped” (which might be crass, but I LOVE it) — to watch my kids build bonds without expensive toys and video games, living a life that would require us to selflessly serve others. It makes me think . . . who am I serving? Myself, by providing my child with all of these distractions? Whose life is more full? Mine, with all of my comforts? Or theirs with their lack of a working stove?

My only complaint about the book was that I desperately wanted it to be longer. I wanted to sit at Levi and Jessie’s feet and listen to them tell me more of Africa, of their love of Ethiopia and how God changed their lives so drastically.

When the book ended I carried around the ache in my heart that only comes from the end of a good book. One that is making room in your heart so that you will never forget it. One that you will think about over and over again. One that shows you no greater love.

This entry was posted in Books!, Uncategorized. Bookmark the permalink.

One Response to Book Review: No Greater Love