In honor of our upcoming national holiday on July 4th, celebrating the adoption of the Declaration of Independence of the United States of America from Great Britain for now 236 years, I thought it appropriate to review one of my all-time favorite films/mini-series. If you haven’t seen the HBO series John Adams, see it. It’s on Netflix to rent (although not streaming, unfortunately), but I am a huge advocate of making this a part of your home movie library. There are seven episodes, each about an hour long, and well worth the time!

Also, if you haven’t read John Adams by Pulitzer Prize-winning author, David McCullough, it’s also excellent. For a history buff, it’s a must-read. For those who might find reading a biography a little taxing, the movie will suffice, as it follows McCullough’s book pretty accurately. I found, however, that reading the book was extremely enlightening, and McCullough is a fantastic historian and writer. 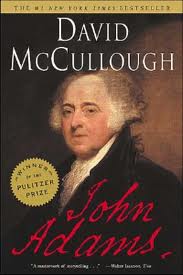 The HBO mini-series, which won dozens of awards and nominations, takes viewers through the life of John Adams, one of the Founding Fathers of the United States of America, as well as its second president. It’s not a documentary, but a drama with an all-star cast: Paul Giamatti as John Adams, Laura Linney as Abigail Adams, David Morse as George Washington, Danny Huston as Samuel Adams, Tom Wilkinson as Benjamin Franklin, and on and on. The acting was absolutely superb, the sets were magnificent, the history was well-followed; I was blown away.

In this series, we are taken to the times and places where the founding of our nation took place, in all of its rudimentary ways and brutality, in all of its excitement and challenges. I am infinitely grateful to be born in the time that I have been (particularly for medical reasons!), but what a thrill to be a part of the birth of a nation, and a democracy that will be a legacy for all time.

The series shows us the personality of John Adams – proud, outspoken, highly intelligent, pessimistic, brilliant; the relationship with his wife – intimate, loving, honoring, respectful; his relationships with the other Founding Fathers – which were greatly nuanced and fascinating to me. We see the Boston Massacre the way it actually happened, as the story is told when you visit the location in Boston where it took place (now a busy intersection), and how John Adams (who was a lawyer) defended the British soldiers accused in the massacre. We are taken through the process of representatives from each state being assembled and voting on various ways to handle the tyranny of Britain, including going to war in 1775, and ultimately how they drafted the Declaration, and the great struggles they went through to pass it, in 1776. Of course then there is the matter of forming the new government and deciding how it will be led (can you even imagine?!), with the institution of the office of President, taken first by George Washington, and second by John Adams. We see the various Founding Fathers, including Adams and his son, John Quincy Adams, serving as delegates overseas, creating relationships with other countries as a country in its infancy.

I had the privilege of visiting the birthplace of John Adams, as well as the Adams home (called Peacefield) in Braintree/Quincy, Massachusetts last month, and it was so fascinating to see how the show replicated the place so well – particularly Peacefield. Countless letters between John and Abigail have been preserved, and standing on those sites gave so much perspective as they described their surroundings, including where Abigail described seeing smoke from the Battle at Bunker Hill in the Revolutionary War.

We weren’t allowed to take photos inside, but just for kicks, here are a couple pictures from the visit:

Criticisms of the series? I personally have none. However, my husband watched it once, and was glad he did, but won’t watch it with me every year like I want him to. He says there’s not enough action in it. Aparently the thrill of birthing an entire country isn’t enough for him (hehe).

I just wish there were other series like it on other Founding Fathers. That’s my one complaint. With that said, go watch it!

Lyndsay Wilkin, an editor for On the Willows, lives in Northern California with her husband, Wyley, and their two kiddos, Harrison and Clara, and their adorable lemon beagle, Indiana (Indie). She received her BA in International Government and hopes to further her education somewhere down the line. In the meantime, she holds the office of "Mommy" and works part-time for Visiting Angels Home Care Services, helping families find caregivers for their loved ones as an alternative to placing them in nursing homes. For fun, she does a little acting on the side and enjoys writing fiction and reading LOTS of books. She loves movies, history, politics, traveling, and volleyball. As a blogger, she's all about big picture topics, especially when it comes to having a biblical worldview in today's Western culture. As a friend, Lynds is absolutely loyal and thoughtful and she would do anything for her friends. “So whether you eat or drink, or whatever you do, do it all for the glory of God.” 1 Corinthians 10:3
View all posts by Lyndsay Wilkin →
This entry was posted in History, Movies, Politics. Bookmark the permalink.