“The second day of July, 1776, will be the most memorable epoch in the history of America. I am apt to believe that it will be celebrated by succeeding generations as the great anniversary festival. It ought to be commemorated as the day of deliverance, by solemn acts of devotion to God Almighty. It ought to be solemnized with pomp and parade, with shows, games, sports, guns, bells, bonfires, and illuminations, from one end of this continent to the other, from this time forward forever more.” – John Adams, in a letter to his wife Abigail on July 3, 1777

What a prophecy! So, yeah . . . we actually celebrate on the 4th (the date stamped on the Declaration of Independence), but we do celebrate what the 2nd stands for: the day the thirteen colonies were given their independence from England! I don’t claim to be a history buff, but I’m a history lover! So, I get goosies easily when I read things like this from our Founding Fathers, and when I visit all of the historical sites in Boston!

2) Boston Tea Party Ships & Museum. After an unfortunate fire, this museum burned down years ago and finally reopened about a week ago! So, I haven’t even had a chance to visit yet. But how could you go wrong!?

3) Museum of Fine Arts, Art of the Americas (new wing). The MFA plans to keep this wing until 2016, so you have plenty of time to come see it! Read more about it here.

4) If you haven’t noticed, I’m a John Adams fan! He played such an important part in our 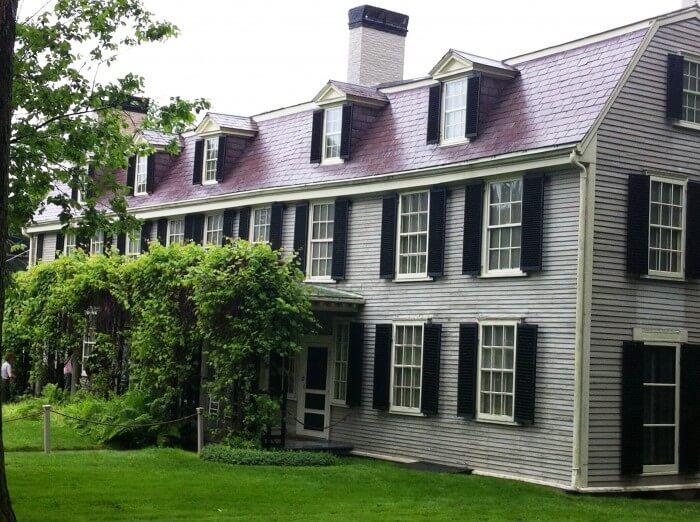 gaining independence. He was a man of great integrity and a man of faith in God. Recently, I visited John Adams’ homes in Qunicy, MA and my expectations were exceeded greatly! Here is a link to the Adams National Historical Park. The museums contained original presidential artwork, John Adams library, his infamous letters to his wife, the list goes on! (His home, Peacefield, is pictured to the right. And I “stole” this picture from Lyndsay’s review on the John Adams mini-series).

5) See Fireworks!! As an adult, I was never impressed with fireworks until I moved to Boston! The Boston Pops (summer program for the Boston Symphony Orchestra) sets up a massive production in the Hatch Shell (outdoor amphitheater) on the Charles River. Fireworks are shot off from a barge floating in the river. It’s actually a very beautiful show. But keep in mind . . . the crowds are thick! Also, be aware that most restaurants close before dinner. But I happen to know from experience that Cheers is open for dinner!

Stephanie Krier Stephanie Krier was raised in beautiful Nor Cal. She and her husband Bobby moved to Boston in 2007, but recently relocated to a little village near Aberdeen, Scotland for her husband's grad program at RGU. Stephanie graduated from UMASS with a Bachelor of Arts degree in Social Psychology and a Music Minor. She loves to see how individuals are shaped and influenced by society. Now that she lives in the Scottish shire, she spends her free time doing a bit of gardening, blogging about her new life in Scotland (scotlandkriers.wordpress.com), exploring the countryside with her dog, Luther, and visiting castles with her husband!
View all posts by Stephanie Krier →
This entry was posted in Art, Family, History, Politics, Travel. Bookmark the permalink.