This morning I sent my kids off to school for the first time. Did I mention that they have been gone ALL day? At a PUBLIC {gasp} school! BOTH of them?! My sweet, precious punkin’-babies!!! 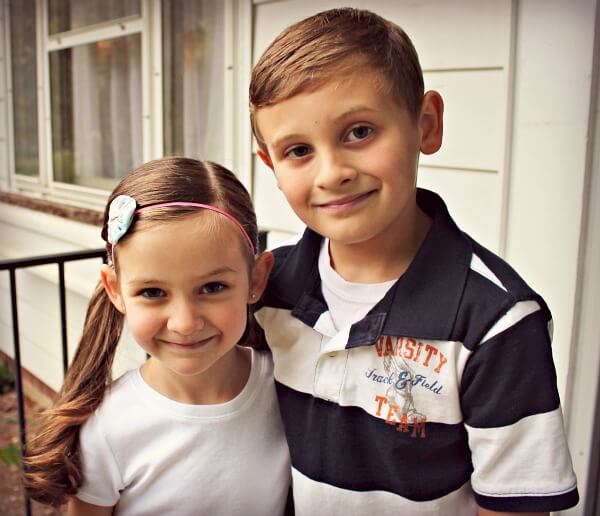 I thought sending them off was going to be much too much for my momma-heart to handle. But surprisingly, I haven’t shed a tear yet. (Now their Daddy can’t say the same thing, but that’s another story for another day.) You see, today I officially feel like an empty nester: an “elementary school empty nester” if you will. In being entirely transparent, today is a day that I really never saw coming. It just somehow arrived.

My husband and I married while we were still attending Southern Methodist University in Dallas, Texas. I was dead-set on climbing the corporate ladder with a pair of stilettos strapped on for good measure. But one unassuming night in March of our senior year, just two months shy of graduation, not one, but two, little blue lines commanded a sudden change of direction. Our five-year-plan evaporated. Instead of climbing a career ladder we jumped on board a parenting roller-coaster, moved back home to corn fields and family in Indiana and subsequently bought a minivan.

In November 2004 I gave birth to the single most precious gift that I had ever beheld, our son Peyton. (And for the record, I retract my aforementioned “no tears” comment because tears are unashamedly streaming down my cheeks now.) All of my career ambition vanished. Replacing it was a fierce passion to love, guard, admonish and pour my heart and soul into developing the best in this teeny tiny baby boy. While we were already in parenting mode, we decided to welcome baby #2, our daughter, Parker, to our family in 2007.

Sandwiched in between baby numero uno and baby numero dos, I worked full time as the Director of Development and Communications for a state-wide non-profit based out of my home office, meaning I worked full-time from home. While theoretically the job reads as every mother’s dream, it privately became my own personal nightmare. The great, faith-living missionary, Jim Elliot, once penned in his journal, “Wherever you are, be all there.” My great failure was that I felt like I was nowhere at all. I was home with my son but glued to a computer working while nursing guilty feelings because we weren’t out on play dates at the park. And vice-versa; when we ran to meet Grandma for lunch, I felt like I wasn’t working as hard as I should. It was lose-lose. So with our daughter’s arrival we determined as a family that my focus for the foreseeable future would be settling into the role of motherhood. And part-time writing aside, that is exactly what I’ve done every moment since we came to that conclusion.

It’s been a blissful five years of mothering. I have kissed booboos and soothed aching hearts. I spent hours in prayer over unlovely behaviors. I poured over books and “Googled” until I went cross-eyed when I needed more parenting wisdom. I made umpteen trips to the doctor, the dentist, the pool and park. We tickled and giggled and took for granted that these moments would ever end. Not to be fooled, there have been icky days when my temper flared and I felt certain that daycare would have been a better option. But I love every single thing about being a mom, and thankfully forgiveness flowed freely in our home, soothing our mistakes and failures.

Because I’ve cherished my time at home with my children so very much, I determined early-on that homeschooling was the best choice for our family. However, when it came time for Peyton to begin kindergarten, we had just moved across the country and decided that a small private school would be the best fit for him. Oh it was! How he adored every single thing about that year. It was amazing to watch. But unfortunately for him (and VERY fortunately for the rest of us), we moved back to Indiana just as he was about to start first grade. “Transition” was our Smith family motto. So in the midst of so much change, I opted to keep Peyton home and school him as originally planned for first grade.

Let’s just say that homeschooling wasn’t bliss. Peyton desperately missed school. I desperately missed some down time. Altogether, it just did not read like the motherhood fairy tale I thought it would be. Something needed to change, so my husband and I started researching local schools and, after a bit of back-and-forth, ultimately decided on what we felt was going to work best for us as a long-term option.

I’ll admit that I had moments of fear and doubt, but God’s sweet, precious peace calmed my heart every time I felt uncertainty creep in.  “And don’t be afraid of the people, for I will be with you and will protect you. I, the LORD, have spoken!” Jeremiah 1:8 (NLT)

Public school meant sending both of them off for a full-day, five days a week this year. My daytime job abruptly ended today. But my lifetime career of mothering those two are far from over. I simply have a new focus and determination. I will pray without ceasing, rejoice in their victories, and nurse wounded hearts instead of skinned knees. My nest will never be empty as long as my heart remains full. And that is good news.