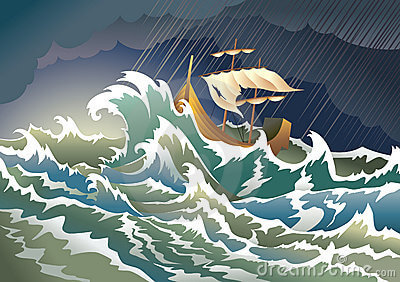 Over the past three months I have lived in Thailand working as an English teacher for children.  I came here because my number one desire was to do what God wanted me to do, and God’s desire happened to be flying all the way to Thailand to teach at a small Christian tutoring school run by Thais. Well, I have exited the honeymoon phase. Doing God’s will can feel like a punch in the stomach sometimes as I have discovered insecurities and weaknesses about myself I have never considered until now.
The man who hired me said at one of our meetings, “We’re all in a boat in the middle of the ocean, and we’re traveling the same direction with the same purpose. Some of you might want to jump out of the boat because you’re tired and want to leave. But you don’t know how far the shore is. Maybe it’s farther than you thought. Maybe there are sharks . . .” Unfortunately, I have been that person who has wanted to dive right back into the water and swim to shore. Who cares about sharks? Who cares that God told me to go here? I’m beginning to sympathize with Noah. I’m beginning to think: Sure, let the big fish swallow me up for a few days. If it means taking a rest, I’ll welcome it.
In a way, I did get swallowed by a fish. I am sitting here recovering from an illness that has lasted a few days and has kept me from work. But that is beside the point.
My time teaching at this school has not run smoothly. Just because God called me to teaching, I am not the highly favored foreigner teacher who is “gifted” by God in the art of teaching. I have had to make more mistakes than successes, and thank God, those mistakes have been turned into good things. For example, I tried to use a “fun” punishment for students who came to class chronically late. They had to dance with the teacher. The ritual lasted only one week because I could see my late students hated it. One student wanted to leave the school because she was afraid I would make her dance! Thanks to my boss’s wife, she talked to my student, and she was back in class, on time, with a smile. She had forgiven me! My boss’s wife knows how to work magic.
In films like Dances with Wolves and Avatar, it’s the foreigner who learns how wrong his old culture is and how it is important he adopt the new (and better) culture. This concept is only partly true. Though I do not see American culture as wrong, it is true that I have had to adopt the Thai culture into the classroom to be successful. But I have this secret belief that not everyone is a kin of their culture. For example, I believe my maternal grandmother is actually Japanese at heart. But I digress. Almost every student I have taught has a fear of shame that is ingrained in the Thai culture. This is why “saving face” is so important, and this is why indirect communication is a sign of respect (personally, it still drives me a little crazy). And then I met three of my students in my smallest class. They are wild little monkeys. None of the indirect approaches were working. They were acting . . . American!
Believe me. I was ready for the direct approach. I wanted to give them a good spanking! (Still do). I wanted to kick them out of class. Finally, against the advice of my boss, I laid down a little tough love. I told them they were bad! I started keeping score of all the times they did not listen to me. I had lectured them many times, but I had never told them they were bad before.
After that, everything changed. They cared about the “bad behavior” tallies that piled up on the board (sometimes I would add a letter of their name every time I wanted to smack them). After class they still spoke to me, and they did not leave the school, and they asked about me when I was sick. They are still little rascals, but somehow I have gained their respect, whereas 90% of all my others students respect me when I protect them from direct honesty. Some students have even told me they love me.
In the end, I have not made a flawless transition into God’s purpose. I’m like those awkward, occasionally annoying lead female characters from movies like New Girl, Bridget Jone’s Diary, and most high school movies. We watch and wonder, “Is this supposed to be entertaining? Right now I just feel awkward.” Unfortunately, I don’t have an infectious nervous laugh and spritely I-can-shrug-off-all-my-blunders kind of personality. So yes, if you saw me, you would really feel sorry, and maybe cry a little bit. But I’m staying in the boat because my failures open my eyes, and my mistakes have drawn me closer to my students. We forgive each other, respect each other, and consequently, love each other.
Photo via .
This entry was posted in Adversity, Relationships, Travel. Bookmark the permalink.