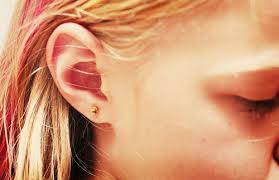 The summer before my firstborn daughter started kindergarten, we were strolling the mall looking for school outfits. She suddenly announced that she was ready to get her ears pierced. I happen to subscribe to the philosophy that kids should make their own decisions about this, and be old enough to understand it DOES hurt, and you WILL have to clean and care for them everyday. No bait and switch. So when the topic came up in the past, it had gone something like this . . .

“Well, we would have to go get your ears pierced, which hurts, but then it goes away after a little while.”

“It stings pretty bad at first, but it starts to go away in a few minutes. And you have to clean and twist them every day so they don’t get infected.”

“I don’t want earrings if it hurts.”

“Yeah, that’s kinda what I thought. Maybe when you’re older.”

I expected this day’s exchange to go along the same lines. But this time, when I reminded her that it would hurt, she soberly looked into my eyes and said, “ I know, Mommy, but I want to be brave. ” My eyes welled up and my mama heart felt like it had swollen so large it would break forth from my chest. I had never heard those words from her before.  She was by nature, and still is, a risk taker. She loves the highest slides and the fastest rides. This was the first time, in my memory, that she was consciously choosing to do something that she was afraid of. I pushed the double stroller over to a bench, and called Daddy. We talked and decided that we wanted to give her the chance to face her fear and have courage. Whether or not she left with pierced ears was inconsequential. So I hung up the phone, and told her that the answer was yes.

She skipped merrily ahead of us, entered the store, and announced to the first salesperson she saw that her mommy and daddy said that she could get her ears pierced today. I followed in her wake, parked the stroller next to the little piercing station in the window, and popped some snacks onto the tray for my two year old to keep her occupied while I filled out paperwork.

My baby climbed up into the tall chair, smiling. However, over the next few minutes, I watched her sense of excitement dissolve into uncertainty, and then into near panic. “Wait, wait, wait. I don’t know if I want it!” Little tears started to form in her eyes and she gave me a look of sheer terror. The sales girl prattled on about how “she was going to be fine” and “it doesn’t really hurt” and “she’s gonna love it” while she prepped.

I took Sophie’s hand in mine and whispered, “It’s okay, you don’t have to do this today. We can come back another time.” The sales girl chimed in with a suggestion. “Hey, how about we just measure your ears and dot them with the marker so you can see what it would look like.” I watched as she considered her options . . .

“You are just gonna measure?”

She seemed to relax a bit while the clerk fiddled with her measuring tool. I tried to smile reassuringly to her, thinking that I was going to have to apologize and excuse us any moment now, when all of a sudden I heard the tell-tale punch of the gun, and watched utter shock wash over my daughter’s face. The clerk pierced the second ear before either of us really realized what was happening. My daughter began to wail. Not the ouch-that-hurt-and-I-need-comforting cry, this is was the shriek of betrayal. As I jumped up to comfort her, the clerk cleaned up the station as if nothing unusual had taken place.

I was undone. I wanted to tear into that #@&$@! sales girl like I cannot explain. But I had a five-year-old crying and holding her ears asking “WHY?” and a two-year-old in the stroller now crying because she saw her big sister so upset.

“Oh Jesus, help,” I muttered under my breath as I scooped up my daughter from the chair, sat her in my lap on the floor, and grabbed our two cold lemonades and held one to each ear lobe. “Why did you do that?” I demanded angrily. The young woman looked at me as if I had asked what time is was. “Oh we do that all the time,” she said conversationally. “They all get scared so we just do it before they change their minds.” Then she asked my daughter if she would like a hand mirror to see her “pretty new earrings.”

You mean those symbols of injustice? Those reminders of your deceit? Sophie shook her head and kept her focus on pleading with me for an explanation. “Why did she lie to me? She said she wouldn’t pierce. She said only measure!”

Over and over again she asked me these perfectly reasonable questions, for which my only answer was, “I don’t know, baby. I am so sorry.” She continued to cry, and I held her as I planned this woman’s demise.

I truly did not know what to do. I did not know how to explain to her why this woman had lied and tricked her. I was furious, and at the same time, heart-broken. Finally, after she had asked “why?” again, I looked at her and said, “Would you like to ask HER that?” To my surprise, Sophie said YES. As I watched her stand and march up to the counter, I remember praying, “Lord, if this woman has EVER taken responsibility for anything, let it be today. Don’t let her brush off lying and deceit as normal and okay.”

I got my little miracle. When my brave little toaster put her hands on her hips and looked that salesclerk in the eye through her tears and asked, “Why did you lie to me!?!” The young woman simply leaned over and said, “I am sorry.”

My world stopped. My five-year-old, while still in the midst of stinging ear lobes and the sting of betrayal, managed to extend forgiveness to a stranger who had hurt and deceived her not ten minutes before. I had no words. Despite how horrible the experience was, despite the pain she was still in, she simply acted on her belief that when someone apologizes for their mistake, you forgive them. There was no further discussion. She turned on her heel, walked back to us, and said she was ready to go.

I was convicted. While I sat on the mall bench, replaying events in my mind, doubting this woman’s sincerity, and considering requesting her termination, my daughter was giggling and climbing all over the play structure with her little sister. She had moved on. She had forgiven. I closed my eyes and asked the Lord for that child-like faith in the power of forgiveness. To not question it, to believe the best. To not let it follow me around for days and weeks like a dark cloud. To resist the temptation to replay it over and over and indulge those feelings of anger and bitterness and resentment. To let it go.

To this day it is a powerful reminder for me. While there are times when it is appropriate to confront and address, many times it’s just little stuff: an insensitive comment, a phone call not returned, an expectation not met. I try to remind myself that I have the choice. I can either sit on the bench and stew, or get up and join my girls having fun on the playground. I want to choose forgiveness, not only because my Father has forgiven me, but because I want the freedom to go and play.

This entry was posted in Adversity, Parenting. Bookmark the permalink.

3 Responses to Ear Piercing and Homicide