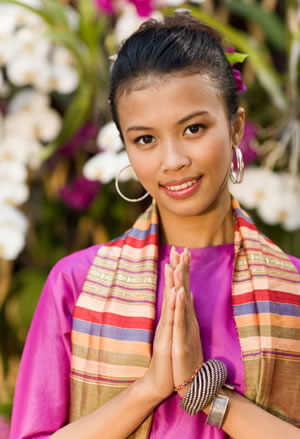 Thailand, Thailand, the land where smiles have many different meanings. A smile can mean happiness, anger, irritation, awkwardness, and more. Thailand is like a painted onion. You look at the surface and you think you understand Thailand based on the smiles you see and the seemingly accommodating and hospitable nature of Thai culture. Well, even though it’s painted, it’s still an onion, and peeling back the layers, hey, more paint, you think you’re done. No. That was just the second layer. You’ve got at least fifteen more to go. Let me explain.

This week was hard at my work, partly for cultural reasons. I work at an after-school English tutoring program run by a Thai couple. One of the challenges has been communication. The Thai style of communication compared to American style is as similar as pineapples are to motorbikes. It’s like I spent my whole life learning how to build a bridge only to discover the people I am trying to communicate with live in underground caves. I grew up learning how to clarify my ideas, speak straight to the point while using techniques that soften my words and allow room for rebuttal. I was taught that if someone wronged me, and I said nothing about it, then it was my fault for not being direct and clear. Unfortunately, bridge-making (direct communication) is not valued in Thailand like it is in America. My softening of words do not translate to a foreign language learner’s ear. Addressing something directly can be frightening and very uncomfortable for a Thai because Thai culture values face. Face is basically the outer evidence of control, composure, and respectability. Maintaining face is very important and highly valued, and one way to break face is to have one’s mistakes revealed to other people. Sound familiar, anyone? I’m pretty sure those who have grown up in a Christian home have lived with their own version of this kind of pressure.

In regards to Thai communication, indirect methods are considered respectful, especially for someone you consider higher up socially. It is the responsibility of the offender to figure out what he or she did wrong without being told directly, which means, everyone must be VERY sensitive to the smallest things like body language and a change in patterns of behavior. For example, let’s say I go to the store with my Thai friend every day after work to buy a piece of candy, but then one day she says she can’t go anymore because she’s on a diet. She’s probably not on a diet. That was a sacred ritual! Something is wrong. Now I have to spend a day or two trying to figure it out, or keep my eyes open next time I see her.

The reality is that I was trained not to be this sensitive to human behavior, so when I shrug my shoulders and say, “That’s okay. Stay healthy,” she’s probably thinking, “I can’t believe this. She doesn’t care that I’m angry with her!” If you are beginning to think I am exaggerating, just have a chat with my Thai roommate (the one who used to worry about sleeping in the same room as me because she thought I looked like a vampire). We’ve had plenty of chats clearing up some of these things (including the vampire part), but of course, it works both ways. Now that I seem disinterested, my Thai friend does not call me to hang out anymore on the weekends because she now believes that I want my space, and I want new friends, and I want to go home, and I hate Thailand! Okay, maybe now I am exaggerating . . . a little. After some sort of negative conclusion has been formed in my friend’s mind, she has decided to pull away. I’m thinking, “What’s going on? She doesn’t like me anymore!” I can’t talk to her about it. I don’t want her to feel obligated to be my friend when I go to her directly and inadvertently force her to politely include me on her weekend plans.

By the way, this story is not that much different from the true story I have thinly veiled from my readers.

After many months, I have restrained my bridge-building techniques to try and understand the ways of living in a cave (time to learn how to use a pick ax and mine for gold). Miscommunication is not as scary anymore. Granted, it takes some self-discovery, spiritual growing, etc., etc., but now when my coworkers want to slap me in the head, I’m not worried because I know it probably has to do with one of my bridge-making comments. This means me giving a little bit of explanation with a few apologies thrown in. The reality is, even though I’m living in a cave, my pick ax experts still honor me by trying to understand my foreign, bridge-making mind. We meet in the middle, as my boss would say. And yes, I still haven’t figured out the difference between an “I’m really happy smile!” and a “Get away from me!” smile. But that’s okay. I’ve only got thirteen more layers to go.

This entry was posted in Adversity, Culture & Media, Travel. Bookmark the permalink.