I was recently invited to be the speaker for a Mother/Daughter retreat in the Redwoods outside of Santa Cruz, CA. This was a little bit intimidating for a couple of reasons.

#1. I had never spoken to kids before, and I had no idea if I was any good at it.

#2. I don’t like retreats. They are an introvert’s nightmare.

But I love what I do, I love having daughters, and my Papa always told me that if the Lord opens the door, be brave and walk through it. So, I did!

Now, when you are speaking to a mixed group, you have to aim at the youngest. I coach, teach, and speak to moms and dads all the time, but this meant my four messages had to engage 7-11 year old girls. Uhhhhhhh. I can neither confirm nor deny if I Googled “tips for speaking to children.”

Finally, I decided to stop freaking out. I have two daughters. I communicate with and teach them all the time. They have both been 7-11. This should just come naturally. So I used what worked, and still works, with them. And when in doubt, use dogs and cats. Kittens, if you can get ’em. You literally can’t go wrong.

All that to say, it was a fantastic weekend. Not only did I get to minister and speak and do what I love, but I got to incorporate my daughters into what I do. They helped with skits and visual aids, they ran my book table, and they helped me set up and tear down. We also did archery, s’mores, line dancing, the zip line, the flying squirrel, a limbo contest (which I was surprisingly decent at for a tall person) and just made lots of general merriment.

One of my goals for the weekend was to help moms and daughters learn how to connect and bond, and we did that, but the bonus was that I got to have my own bonding experience with my own girls. We have so many wonderful memories from that weekend. I also realized that I still know most of the lyrics on the 2007 Hannah Montana CD that they blasted on the trip down, and that I can still sing them with my mouth crammed with Dots candy. All good to know.

So what did I take from this experience that might be the least bit interesting to you? Maybe nothing. But I want you to know, these girls were glowing. Yes, partly from the ice cream, but mostly from the undivided attention from their moms.  And let me be specific–it’s not just the quantity of time, it’s the quality of the time.

The moms at the retreat who were able to step out of their traditional “training” role for those forty-eight hours were the ones who made the biggest deposits into their daughters’ banks. They decided to ignore the chewing with your mouth open, and focus on making silly faces in the photo booth. They temporarily swapped the authority figure hat for the #1 Fan hat. They played games, had dessert after every meal, and talked about the secret crossovers between Frozen and the other Disney princess movies.

Of course, back at home in the real world, we can’t do this all the time. But we can do for ten to fifteen minutes on most days. We can swap that hat out and purpose to give our child a few minutes of true quality time. And we don’t have to go on a Mother/Daughter retreat to do it. Although, if you get the chance, you should totally do it. 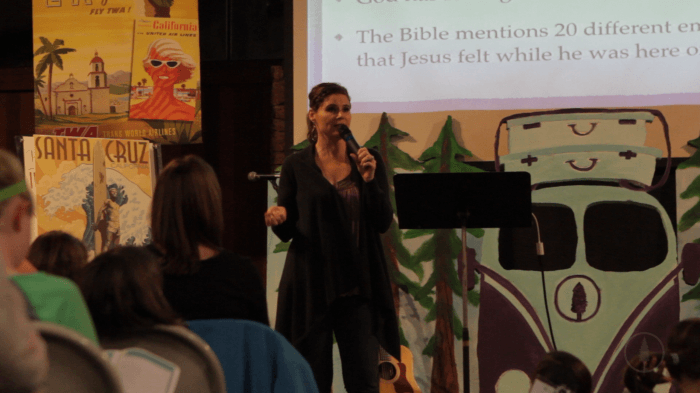 This entry was posted in Family, Parenting, Relationships, Uncategorized. Bookmark the permalink.